A recent tweet, associated with this image, misrepresented our Airspace Design Option Development document which was developed in accordance with the CAA Airspace Change Process (CAP 1616): 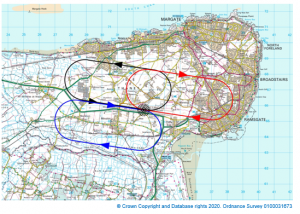 The text associated with this image, which was not included in the tweet, is quite clear:

To facilitate access to the airport for General Aviation (GA) users, a Non-Directional Beacon (NDB) Hold will be established in the airfield overhead for the use of GA aircraft for both training and whilst awaiting approval to land at the airport.  The NDB Hold will only be used by Cat A or Cat B aircraft at a maximum speed of 140 Knots corrected Indicated Air Speed (KIAS).  The Hold will be based on the position of the NDB and will consist of a 1-minute racetrack, orientated in alignment with the runway.  Figure 4 below shows the 4 possible options for the position of the Hold.  The minimum height for aircraft in the Hold would be 2,000 ft.  The actual position that the NDB will be located at is still to be determined as part of the airport redevelopment so the tracks of the Hold may vary slightly to those shown below.

The Crown Copyright label was also not included in the tweeted version.

For avoidance of doubt, general aviation refers to small and light aircraft only.

Holds associated with larger passenger and cargo aircraft will, by necessity, be further from the airport and, wherever possible, over the sea.  While they are still subject to development and consultation, and ultimately scrutiny by the CAA, options being consider include, but are not limited to, the following: 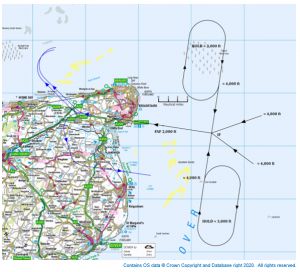 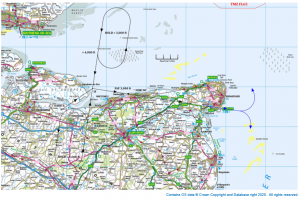