In addition, HyPoint and Manston have committed to exchange information about the development of hydrogen infrastructure in airports around the world; ongoing progress with respect to hydrogen fuel cell technology and usage; and various government and commercial initiatives related to hydrogen aviation. The companies will also work together on related grant opportunities in order to implement the UK Net Zero Strategy and accelerate the transition to zero-emission aviation. 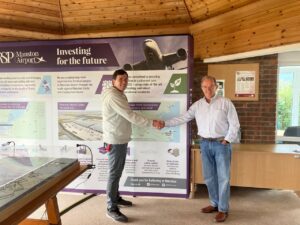 “Along with HyPoint’s headquarters at Discovery Park in Sandwich, Kent is rapidly becoming the world’s go-to destination for hydrogen aviation innovation,” said Dr. Alex Ivanenko, founder and CEO of HyPoint. “This partnership will enable our customers to conduct real-world testing and evaluation of our hydrogen fuel cell systems in their aircraft — a critical step to bringing zero-emission hydrogen aviation to the world. In addition, our partnership will serve as a strategic pillar in the reopening of Manston Airport, which will be a boon for Kent and all of England.”

“Manston Airport has an illustrious history as a Battle of Britain airfield and, under our management, will have a promising future as a vibrant hub for international airfreight – one which delivers economic prosperity and employment across Kent and protects a strategic aviation resource for the nation,” said Tony Freudmann, Director of RSP. “In addition to reopening Manston as a global freight hub, enabling the airport to fulfil its role in helping the UK trade across the globe and to import vital and time-sensitive goods, we plan to serve as an international hub for clean aviation development. We are excited to work alongside HyPoint and its customers to bring clean, safe, hydrogen-powered aircraft to market.”

The revived Manston Airport, expected to open in 2025, will provide air freight operators with a realistic alternative to the overcrowded London airports; ease the considerable road congestion caused by lorries carrying freight through the channel tunnel to European airports; improve resilience; and boost economic growth and jobs in Kent. Working with HyPoint and on other initiatives will put East Kent and the UK at the forefront of clean aviation. It will also stimulate high tech job creation and knowledge transfer. Manston is expected to create over 23,000 jobs across East Kent and the wider national economy by the airport’s 20th year of operation.